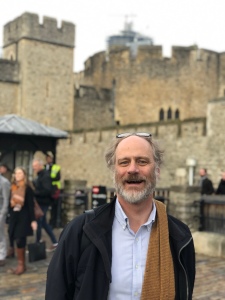 History is a story of discontinuous events—events that collide like weather systems or galaxies, having barely understood origins, and even less decipherable records. All the witnesses were destroyed in the collision. What they saw, what they thought, and what they felt—even if they recorded their observations on stone, paper, steel, or silicone, have been destroyed along with them. We are living in the age of delusion, in which we believe in the sanctity of our recorded history—either self-scribbled or captured by another.

This thought is brought about by two things. First, wandering, quickly—this time—through the British Museum (or Westminster Cathedral, or almost anything else in London), what becomes painfully obvious are the gaps. All these artifacts, so painstakingly arranged create an idea that history is continuous, and has flowed in a linear pattern. And then a closer inspection shows that over and over again, things haven’t come that way. There are sudden breaks in history, when entire empires vanish, or when they change—seemingly overnight—religions, or methods of governance, or technologies, and the old gets swept away, almost as if it was a betrayal of the new.

England as it shifts back and forth between Catholicism and Protestantism bears these marks hard. Or, reading through the story of Ashurbanipal and the claims of glory made by this king reminds me of Shelley’s “Ozymandias.”

Thinking of history reminds me of Stephen Jay Gould’s idea of punctuated equilibrium—evolution proceeding in long quiet periods of little change, and then having sudden outbursts of change. I know, we are taught that slow and steady wins the race, but, we are also taught to believe in the nature of story as an overarching “way things are.” We see things through that frame, and it doesn’t always support the picture inside—or outside—the frame. 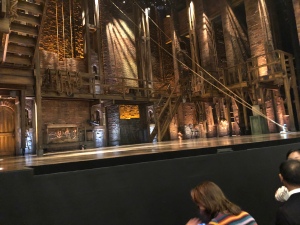 Second, in the musical Hamilton (which was also part of this trip to London), the character of George Washington warns Hamilton that we do not control who writes our stories. He’s telling this to a man who believes in his power to literally write his own story—and to use his words to cement his reality. He can’t—and doesn’t. His wife, Eliza, sends his legacy forward—and Lin Manuel Miranda brings us her legacy. But, as Miranda admits in interviews, even this moment for Hamilton—and therefore, for him as well—is provisional and subject to changing tastes and critical opinion.

Does everything disappear? No. There are 2000 year old Roman walls in London. But Rome? Everything can disappear. And we will tell stories that soften the loss.

I wonder, I can’t help but wonder, what I am doing when I write: whose story I am writing? It isn’t my story. Of course it’s my story–as if it could be anything else. Nonetheless, as I write about characters who are 5000 years old–older in some cases–I think about history, because they think about history. How can they not? How can any of us not? It is everywhere–in the streets, and in the faces, here in London.