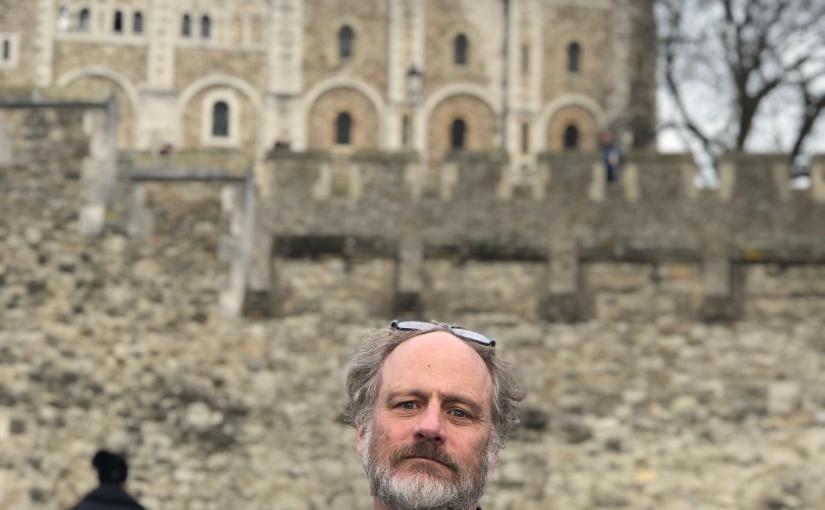 The sun rose at 8:04 am in London on the shortest day of the year. It set at 3:53 pm. A shorter day than Fort Fairfield in northern Maine. Add clouds and rain, and the day seems shorter. Is it any wonder that people on their ways home from work find their way into pubs lit with fireplaces? Our days in London were marginally longer, and after walking through the city each afternoon, we found our way to a pub. The Paternoster, The Old Red Lion, Punch and Judy’s, The Swan, Lady Abercorn’s, The George. Some of these were easy to find, others required a turn down a slender lane. Each was bustling.

The charm of London is found in its strange alleyways, endlessly curled streets, and tucked away history. If there is a grid, and in some way, there is, it is bent around the past and the ox bow turns of the Thames, and everything attached to it has been attached in a haphazard fashion. For instance, the coagulation of insurance buildings in central London: the gherkin, the cheese-grater, the scalpel, and the inside-out building; defy any sense of a rational aesthetic plan. Or the juxtaposition of the Tower on one side of the Thames and the glass pineapple of the City Hall just across the river.

I have wandered down the narrow canyons of New York City, through low slung neighborhoods in San Francisco, across broad avenues in Chicago, in and out of fish stalls in Seattle. Even my home city, Philadelphia, built as it once was, on squares, in spite of the Schuylkill river turning into the Delaware, and the oddly oblong expanse of Fairmount Park, makes easy sense. Get oriented and go. London seems to double back on itself, and in doing so, has folds and torn edges through which a body can slip out of any regular order.

And so London’s history is oddly folded into the cityscape as well. A tour through the city—you cannot tour the whole city, or tour it on a bus; you must walk it—folds two thousand years of history, creased around a Roman occupation, a French conquest in 1066, and a fire that destroyed 80% of the city in 1666. And the city is just the square mile that had been walled and gated, but is now open and underlaced with a rail system that carries you quickly to nearly every point beyond the old wall.

The people who live there are folded too. The streets are packed with diverse faces—a variety of eyes and ears and cheeks and chins that make them all different, and so different from the faces in American cities—and sounds. Their voices carry languages from Europe, Africa, and Asia—all of which are easy (and relatively cheap) to get to, even from this island nation. It is as if a map of the world has been folded and brought all these people here. Scarves are the only nearly universal banner, and men tie theirs tightly around their necks. Women walk down streets in shoes ill made for walking—but that is, sadly more universal than naught.

There is an orderliness to the whole affair. Announcements in the Underground direct people where to walk down hallways and on escalators. Advertisements along the walls of the stations counsel caution with wallets and and advise care with alcohol. “Mind the Gap” is stenciled on the ground where the trains stop, and cheeky announcers corral riders whose fancy Italian made shoes have strayed over the yellow safety line. Cross walks show a green walker when it’s time to cross—around Trafalgar Square the walkers take on a variety of LGBT friendly forms: couples and symbols. Just remember to cross when the green light comes!

In so many ways, walking through London was like walking through my mind–folded and full of associations and reveries. My fellow traveler asked what surprised me most, and I answered, nothing. Of course, the fact of a place like London is a surprise all by itself. Are there more surprises to come, more cities to inhabit, that will fill my mind with visions—or somehow, match my visions? Yes. And, yes.