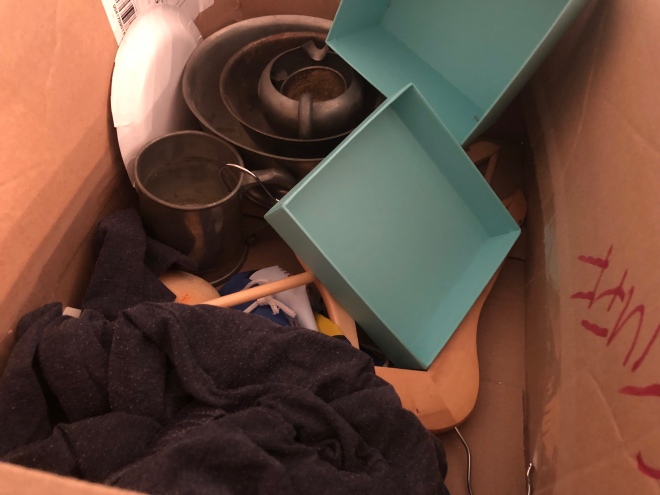 I am unpacking and repacking old boxes. I have no fantasy that I will throw away old essays or my notes from Joyce and Woolf classes. But there are things I threw into boxes as deadlines approached, and now, when I look at them, nothing. I have whole boxes of emotional and intellectual cul de sacs.

Some of it is technological detritus. Phone cords? Old phone earphones? Some are records from past lives. A checkbook from Pittsburgh? A W-2 from Binghamton? There are kindnesses. A condolence card from my father’s funeral. There is a sweat stained baseball cap from a beer festival. Short ceramic candlestick holders and half burned candles. Another hank of phone cord.

There are more ringing memories. As she was moving from her home of forty years, my mother sent two packages of photos and records from my youth that include a hand made report card in which I earned hand-made A’s in subjects no school ever taught and a photo of the Varsity Swim Team with a dour me in a letter sweater. Other things. Almost twenty years ago, I set aside a bag of Philadelphia Inquirers containing my father’s obituary. A windup nun that shoots sparks as she walks patrols the corner of a now empty box.

These will all make the move, except, this time, I will reopen each box when I settle into my next home. I will spend time going through some of the boxes with my daughter, just to share strange pictures of her father and family, odd toys, and other remnants of my goofier life. Other boxes I will map out—actually going back over notes and essays.

And then, of course, there are the dozens of notebooks containing scraps of thought, dreams of beginnings of stories, hints of recipes, names collected and noted in lectures. As I was packing, I noticed a phone number on an otherwise blank page. There is no name, no feathery reference, just a number. Some mysteries will remain mysteries, and they will travel with me, just as surely as certainty will.