When one encounters a force of nature, the best one can do is be moved by it. I was 15 or 16 when I first saw this, and fell head over heels in love with Barbara Streisand’s character, Judy Maxwell. I didn’t get half the jokey allusions, but that would come later, just as later I would see Howard Hawks’s absolute masterpiece Bringing Up Baby–which uses a dinosaur bone (the intercostal clavicle!) as opposed to four plaid overnight bags as the MacGuffin. The point was to set the romantic leads on an adventure, and watch them discover love along the way.

Ryan O’Neal plays Howard Bannister (as in sliding down the…) as a handsome nebbish. His highlight comes when he tinkles out “As Time Goes By” while Judy (Streisand) sings. Otherwise, he is the simply perplexed witness to the whirlwind that is Judy. At one point, Bogdanovich has him turn to the camera and implore, “Help,” to which the audience can only respond, “Submit.” Bogdanovich surrounds Bannister with a cast of men who are all more recognizable in caricature—it’s a bag of types, all of whom threaten to overshadow Bannister, who at least has the decency to distinguishing himself by sporting a narrow plaid bow tie. Otherwise he is seductively bland.

I’m going to cheat here a moment and compare O’Neal to the other leading men in these movies: Lemmon, Harrison, Sellers, Taylor, Finney, Scott. He is easily the most handsome, and also the least striking, which makes him nearly disappear. There’s just no way to get a grip on him—its like grabbing melted butter. Later, watching Cary Grant in the movie this was built on, Grant’s David Huxley sputters and mugs with alacrity. Bannister is simply overwhelmed—he can’t even untie his bow tie. 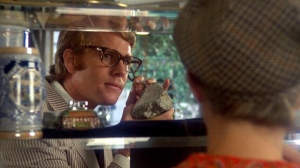 But there’s a magic in Bannister, and that is we can easily paste our psyches’ over his, and why wouldn’t we? Because, for reasons that are passing understanding, he draws the attention and affection of Judy Maxwell. There is no moment of kindness, no flare of brilliance, nothing. She swoops down and carries him off the way the roc would snatch an elephant from a caravan. What man doesn’t want to feel the full force of hurricane Barbara? Submit.

Of course, reimagine the parts, with O’Neal as Judy and Streisand as Howard, and the creep factor would explode. No man could get away with the barrage of attention that Judy lavishes on Bannister, unless he was wielding a knife, and that is a very different movie, thank you very much Dr. Lecter. It’s just a movie, a slice of fantasy and fun, and so enjoy it. Don’t think about it. Submit.

And because of this movie, and several others in this series, I never had any difficulty with “No, ” and I didn’t always trust “Yes” either. Unless the terms of endearment were as stridently proposed as Judy proposes them here, I bumbled romances. And for years I substituted someone else’s desires for my own. That changed, but it took time, and in the intervening years lead to some less that fortuitous choices.

I don’t know how Howard and Judy will end up. The quotidian part of romance will probably only last as long as the cartoon that plays at the end of the movie. But it was nice to think (and feel) that there was someone as magical and forceful as Barbara Streisand’s character waiting in a shop to scoop me up and transport me to the land of joy.