I first saw this with my family in the den of the house on Tinkerhill Road in Phoenixville.  It was a Sunday Night event movie, probably on ABC. This was also how I first saw Lawrence of Arabia and The Great Race and Ben Hur and The Ten Commandments.  I later saw My Fair Lady in a theater, first at Swarthmore College on a Friday or Saturday night movie night, and later when the print had been restored, most likely at the TLA in Philadelphia. I have seen it on television several times.

I remember looking for Pygmalion, George Bernard Shaw’s play on which the musical is based, in my school library (it wasn’t there).  I looked it up over and over, as if this time it would have been added. A note that has nothing to do with anything else: I am an inveterate checker and re-checker of things. I used to call my answering machine several times; if there was a message it would pick up after two rings. I reload baseball scores and stock market indices on my cell phone with the manic fury of a dervish. I can play solitaire until the sun rises. It’s like mental chewing gum; it allows the homunculus who says “No,” to stay busy while the other dwarf imagines possibilities. Which does have something to do with My Fair Lady, after all. 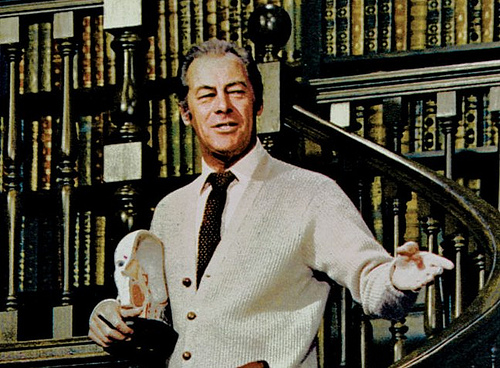 Higgins is a brilliant driven man, and he is also, what? “a bad tempered… conceited success.” He declares himself “an ordinary man,” a “very gentle man,” and a “quiet living man,” when all evidence points to the contrary.  He is an idealist and a snob. He rails against “verbal class distinctions,” while living in the lap of all the benefits of his class. I was fortunate that when I first saw this, I was able to instantly recognize that Higgins was a fool, if a fool surrounded by a stultifying upper class, and a set of gender norms (I did not call them that then) that constricted his heart and mind.  When he sings, “I’m an Ordinary Man” and “A Hymn to Him,” I knew he was delusional.

By comparison, Eliza’s songs are full of hope for connection. “Wouldn’t It Be Loverly,”

and “I Could Have Danced All Night,” are genuine, human wish songs. Eliza’s vision is never in doubt in this movie.  She is a “good girl,” but early on, while watching a group of older women string beans before the market opens, she realizes that they are her future, and if she wants something else, she is going to have to change.  Higgins words, “I could even get her a job as a lady’s maid or a shop assistant, which requires better English,” haunt her. She goes to Higgins and undertakes the work of transformation.

Eliza and Higgins (and Colonel Pickering, charmingly played by Wilfrid Hyde-White) get the project underway.  There are predictable challenges (“Just You Wait”), bumps (Ascot), and the eventual success (“You Did It!”), but the story is not about Eliza’s transformation.  Of course, the story is about Eliza’s transformation, but it’s not about her learning to speak English well enough to masquerade as royalty at the Embassy Ball, or even speak well enough to work as a shop assistant.  Eliza learns her value, and she learns that value is not determined by the upper, middle, or lower-class morality, but by something more transcendent—something more ideal, platonic, “friendly-like.”

Did I know that part when I was 14 or 15?  No, I might have sensed it, but most likely it swam away from me.  What I did know was that Higgins had to change.  He could not remain aloof and professionally disdainful of the world–an intellectual bully–but had to accept that deep personal connection was not only possible, but necessary.  Eliza cracks his shell.  She sees him bereft of her presence, and he knows that she has seen him in this vulnerable state. He may not change his affect, but they will always know it is a front.

Whether or not they form a romantic attachment, they have become true partners, because he has shown her his vulnerability.  She will become his secret keeper (He is human and flawed), and she will also become his protégé and heir, and better than he was because her experiences have been more galvanizing. I knew that was what partnership was meant to be, and recognized that change only came when a personal cord was struck.

And now to come back to those two little men living in my brain: Higgins is not aware that he has to change (or he will lose Eliza), nor is he aware that in his vulnerability he will gain strength (Eliza’s company). How often have I had to distract my thoughtful, intellectual self to gain access to the more vulnerable feeling self? Higgins, for whatever reason, has girded himself with thought and professional aloofness. The endlessly repeated exercises with Eliza—the servants only hear “Ay not Aye”— distract Higgins, and allow something new, something finer, to flower within him. Yes of course, it’s just Eliza’s newly potent personality that finally wins him over, but the seeds took root during those exercises.

Did I play solitaire until the sun rose because I knew it would distract my thinking brain, and help me “feel”? No.  It’s just what happened—over years, not the six months that Higgins had with Eliza.  Maybe what I needed was an “Eliza.” Or a household of servants. 40 more years certainly did not hurt.