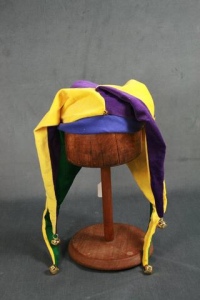 So much of wit is based on shared experiences.  I know I can toss in a “Brian Clements, we love you, get up!” to my friend Brian, and he will smile that wry smile that accompanies a reference to O’Hara. Or proclaim, “Hell, I love everybody!” and he will know what I mean. If I draw my finger across my eye, we have traveled into Bunuel’s fractured mindscape. We share those images and words. I can tell my brother to “Blanket the fucking jib,” and he will know the context. My mother can call me a “Son of a Bitch,” and know the ground upon which she treads. My father would offer a “You have all done very well,” recognizing the provenance of ignorance that surrounded Mr. Grace’s signature line.

My fantasy baseball friends call themselves “lobsters” because 25 years ago, I dubbed us the “League of Blood Sucking Intellectuals,” and one of us couldn’t get “sucking” through the email filter at his job (hard to believe—hehe). So, “Lobsters” we became. One day on the golf course, while following a slow moving group of much older players, I declared that my goal in life was to grow up to become a codger, which elicited chuckles. Maybe because I was already on that road. Or maybe because the bridge to that destination had washed out long ago in my life.

I sit in plays and howl out loud at all the jokes, my laughter more obvious at the jokes no one else gets. I make jokes daily that fall on deaf ears, and that’s because my reference points are in literature and art, and no one knows my plan. If I go for slapstick, there are laughs, or pity (Dr. Brennan, we love you, get up). “Bastard,” or “Rat Bastard” will get broad smiles. Because I am a teacher, I rarely turn my barbs on anyone below me on the food chain—I rather turn myself into shark bait, and perhaps, by example, show the way from chummy ignorance to razor-toothed wisdom. That bridge too stands on uncertain pilings.

I can understand why comics aim for the gut and crotch—there is shared knowledge (fat and thin as it may be) in the bodily functions. And I get it, and laugh at it, up to a point. There is no denying that absurdity of the fleshy slap of desire, or the rumbling gurgle of gluttony. We fuck lustily. We eat heartily. We can dress both up in fantasy, but the actuality is less glorious. And more. The secret is that the middle way is stupid and tiresome. Angels or demons are the way. Humans don’t know enough.

Once upon a time, I read Joyce’s Ulysses, and realized quite quickly, that he was having a ball. My serious classmates scoured the book for meaning, and yet, a big part of the meaning was swaddled in laughter. The great play. Not for them. And so, out went the baby. I do not deny that there is something serious in that book, or that there are books and art and times that are deathly serious—all of them, in fact. But there is play, truly unconscionable and irreverent all the time.

“Dying is easy,” goes the old saw, “Comedy is hard.” Now, we hide the dying, or reverence it out of the sphere of our daily experience. Failure—even for those who practice the dictum, “Fail Harder” (they do so only to achieve a higher form of success)—is fatal, and therefore dirtier than anything else we can imagine—even dirtier than the raunchiest comic’s imagination. And, like death, inevitable. But we do fail, do fall, and do, with mud on our clothes, rise back up, not like zombies—there are plenty of those already manning the parapets—but like humans who have learned that laughter is the key to resilience. It is the joy of the second, third, fourth, and fifth acts.

We may need to banish Jack, but we also need to learn from him. And the Queen will have him back. And even if you don’t know who Jack is, or why he was banished, or which Queen requested the fat man’s return, we know. It may be hard to walk into the room, caked in mud, but given the alternative, here I go, ready to kill it. Again. “Brian Brennan, we love you, get up.”