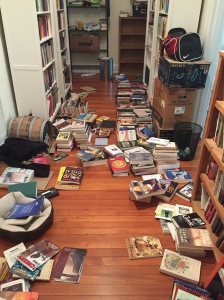 At some point—and it happens fairly quickly—the life of an English teacher becomes more about re-reading than reading. This is a preposterous change from the life of a graduate student, when everything is reading. As a student, there may be a handful of books that one reads a twice, but those are also the books with which one spends an engaged period of time—there is an essay in the offing. If you read them twice, chances are you read them a half dozen or dozen times. By the time you start teaching, the repetition is no longer driven by your desire or directed curiosity, but by a curricular roadmap that more often than not, you have not decided.

Because of my background, my friends will often ask what I am reading, and I know that they mean, “What are you reading for the first time?” It’s a “tell me what is good” question. At this moment in my life, most of what I read, I am reading for the 7th or 8th time. Or I am reading student work. I can admit that neither fills my sails the same way that exploratory reading does. Part of the joy of exploring is not reading important books—or rather, it is discovering that the books I read were important (to me, to the world) as I read them.

There is something thrilling—yes, thrilling—in finding myself in an entirely new stream of thought, full of images and ideas that had not occurred in my mind in that specific way. I love the feeling of being in an entirely foreign mind. I brought home new avenues and new approaches to my own work from nearly every book I read as a student. And, yes, I am still a student, and I still find new ways. Early on, the novelty that most easily enchanted me was setting and plot. Novels set in strange places (Vietnam, Middle Earth, Geatland, London) and with characters who did strange things (solve crimes, fly dragons, uncover moles, turn into monsters) drew my attention and appreciation. I still appreciate a mystery, horror, or fantasy novel; Michael Chabon tethers genre to literary merit with alacrity.

But most works of literary merit tend to eschew genre elements. The strangeness is found more in how the characters think and feel, and how those thoughts and feeling serve to reveal the deeper ideas that the novel walks out into the world. The thrill comes from reading along as characters struggle with complex thoughts and feelings, and the novelist struggles to portray a world that is, more often than not, contradictory. Contradiction is the single provenance of literary fiction. Woe to the mind and heart that seeks a generously reductive answer to life’s troubles in literature. Unless one learns to love ambiguity, irony, and contradiction.

I think that the rush of all the new work I read while I was still a full time student, blunted the more mournful aspects of contradiction. As I read through libraries, it seemed as if there were a million ways to get things done. I continue to champion diversity in large part because I found comfort in the breadth of possibility. However, the habits of re-reading drive me to emphasize less possibility. This occurs because if contradiction is the provenance of literature, then what happens in the land of contradiction is too often sad. Characters are too often caught, like Odysseus, between Scylla and Charybdis—the chance of losing everything and the certainty of losing much. Where is the gain—other than hard-earned self-knowledge? Where is the dinner and conversation and new-forged friendship with people who had been, only moments ago, strangers? 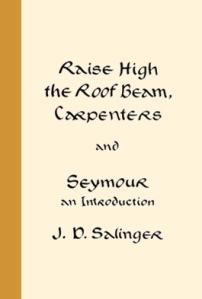 I feel the loss keenly. I am dissatisfied with the too morbid outcomes that serious writers propose, and with the deathly insistence on disconnection and disappointment. And I am dissatisfied with trudging over this same ground over and over again. There must be the possibility of joy, and please, for gods’ sakes, there must be discovery. Which means new works. In “Seymour: An Introduction,” Salinger allows Seymour to give his brother, Bruno, the single best piece of writing advice—and by extension, life advice—I have ever read. It is hopeful. “Imagine the book you most want to read… Now write it.”

It is time. Finally.