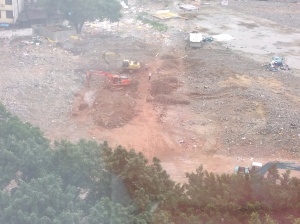 It’s Sunday in Guangzhou, which means construction. Always construction. There is a jackhammer attached to an excavator (think steam shovel) making dust out of out foundations in the lot beside our hotel.

Our adoption coordinator explained that even though Guangzhou is 2000+ years old, little in the city is more than 100 years old, and most post dates 1949. Here, the new is valued over all. There are museums for the past.

In 24 hours we will meet Shi Hui, whose name could be pronounced one of three or four ways. We have been saying “Shee Wee,” but it could be “Shuh Way,” or “Way Way,” or who knows? All we can do is learn.

And did you learn, while you were growing up, that everyone in China rode a bike? They don’t. Some streets have “No Bicycle” signs, and it is clear that on the streets of Guangzhou, bicyclists are either daring or endangered.