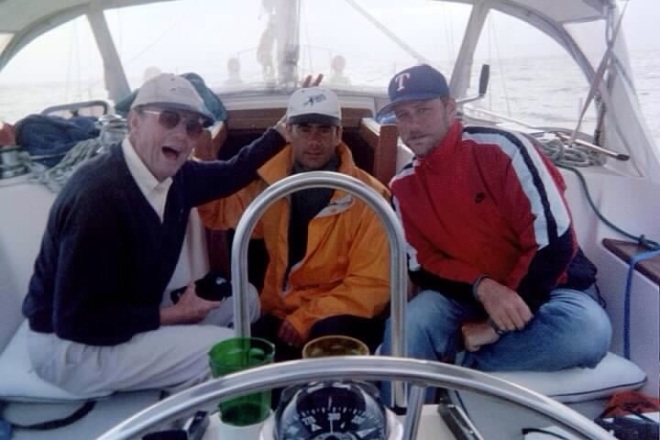 My father would have been 82 today. I have been thinking much about him recently, and not only because of the recent addition to my family. I am giving a sermon at my church in a week about the things I learned about being a father from my father.

My dad was reluctant to pass on the secrets of fatherhood. In part this may have been a result of his life with his father–we pass down intentionally or not the raising we received. In part it may have been his general willingness to let us, his sons, figure things out for ourselves, even something as meticulously specific as blanketing the jib (ask my brother about that). In part fatherhood may have well remained a secret to him, even late in life when we were his children and no longer children.

Is there a secret? I suspect my father had some sense of one, and that it guided him the way that stars and winds and currents guided him on the ocean. But he was never one to get mystical about that secret; he happily took up the GPS and autopilot when they became available. His choices were practical and methodical and willful. I think his vision of the big secret was equally practical.

Nonetheless, he liked schmaltzy movies, as well as acerbic humor. He enjoyed the fellowship forged in extraordinary ventures. Something in him bristled against the vagaries of weather and the capriciousness of emotion. Whatever was mystical to him was grounded in a belief that right should triumph, that wit was sufficient armor against nonsense, and that sheer determination not only could, but should lead the way through the various chaotic episodes of life.

So, even though he knew that before heading out to the ocean, he should be able to take apart and repair the Diesel engine “just in case,” he also knew that at some point the ship might fail and that the only thing that would save the voyage was singular, capable, heroic action on the part of a sailor. He had the sense to know that when he could not be that sailor, he found those who could rise to the challenge, and he gladly called on their best when the occasion demanded.

Is that a reasonable thing for a father to expect? Is it possible to teach dogged, determined, and day-to-day heroism? Or does it come from within, or from some other, stranger “without”? Even if he knew those answers, he would have remained reticent (on this matter at least); he would have let us figure it out.